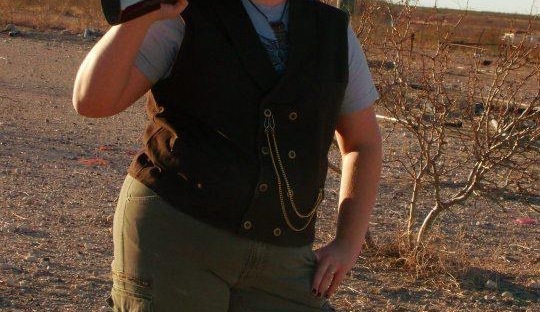 In November of 2010 Sarah saw someone post on facebook about a writing challenge they were participating in called NaNoWriMo. On a whim she looked up the site, made an account, and unknowingly started a journey that would change her life. That year she started writing with no plot and no idea how to even write a novel. She met up with friends in Fort Stockton who were also participating. They had a great time that first November but once it was done they missed those writing sessions and wanted to do something to progress their writing all year round. Critique Cafe was born from that.

Sarah participates in Critique Cafe all year long but November is one of her favorite times of the year. She is a Municipal Liaison for National Novel Writing Month and loves when she gets to help encourage others to write their own novels during the challenge. She loves the NaNoWriMo organization and how much they do to encourage young story tellers.

When she isn’t writing she may be found participating in her other hobbies which include painting, reading, and tabletop gaming. That is when she isn’t busy chasing down her two little boys and shuttling them to various activities of their own!

It was a dark and stormy night. Of course it was, that’s how all of these things seem to start isn’t it. I was waiting at the bus stop, wrapped up in my jacket, huddling underneath the small covering when I saw her. A flash of lightning lit up the street and there she was, walking with no umbrella. I watched her walking in the darkness for a moment wondering why someone would be out in weather like this with no umbrella.

Another flash of lightning lit the sky and I noticed a person following a good distance behind her. He had a large hat on and a trench coat with the collar up. The woman crossed the street at the cross walk and turned towards the bus stop. I tried to nonchalantly look around, trying to keep an eye on the man. He was leaning in a doorway watching the woman. Lightning flashed. I tried to try to get a better look at him but even with the lightning, darkness seemed to cling to him, completely covering his face so I couldn’t make out a single detail. His head followed her as she walked into the bus stop. She sat on the other end of the bench, closed her eyes, and leaned against the dirty plexiglass. She had short blonde hair plastered to her face and her red jacket was dripping it was so soaked. Should I say something about the man?

“Oh, uh hello.” She said with a nervous glance. The smell of vanilla and brown sugar tickled my nose.

“Yeah, I didn’t know it was going to rain, otherwise I’d have grabbed an umbrella.”

“Here, take mine.” I held out my umbrella.

“Oh I couldn’t. You need it, besides I’m already soaked anyway.”

“I’ll just be jumping on and off the bus. I don’t need it. I insist.” I gave her a smile. She returned one as she grabbed the umbrella.

I chanced a look across the street to see if the man was still there. He was staring at her. An 18 wheeler passed in front of me and when it was gone, so was he. I quickly looked around but there was no trace of him. Maybe I was imagining things. I looked back over to her and saw that the man was now on our side of the street and walking this way. I could feel my heart pounding faster and my mouth going dry. I could see him blurred beyond the plexiglass. I didn’t know what to do. My palms were getting sweaty. I had an intense feeling that something terrible was about to happen. I opened and closed my mouth several times but no words seemed to come out. I swallowed the lump in my throat and refused to take my eyes off the menacing man. Thankfully the bus pulled in. Safety was a few steps away. I jumped to my feet.

“Ladies first” I said as I gestured to the door, hoping she would enter quickly so we could leav

“Don’t get on the bus.” It was the man from across the street. I tried to pull away but he was remarkably strong.

“Let me go!” I pulled and pulled, but his grip never slackened.

“Trust me. You don’t want to get on that bus.” I looked him in the face. He was an old man, covered with scars.

“Don’t get on that bus.” He emphasized each of those last words.

“Doesn’t seem that way” I tugged my arm again.

“Look at her again.” He whispered, his lips barely moving.

I looked up onto the bus and saw the woman staring at us. She had a pleading look on her face and held out her hand like she wanted me to join her. The man suddenly pulled something out of his coat with his other hand and held it up to her. Her face immediately changed from a sweet, demure, young woman to a raging snarl. I stepped backwards and he let me go. The door of the bus closed as she was still snarling at him. The bus began to pull away and I looked at the old man.

“What did you see?” He asked as he tucked the item away.

“Did she have fangs?”

“You thought I was the threat didn’t you.” He said with a wry smile.

“You’re not answering the question. What’s going on?”

He looked me over.

“Come with me and I’ll tell you everything you want to know.” He stepped out into the rain and began walking away.

What should I do? It’d be crazy to follow him, right? Confused, a little scared, and without an umbrella, I jogged into the night to follow him and unknowingly start a
crazy journey that would change everything about my life and what I knew.