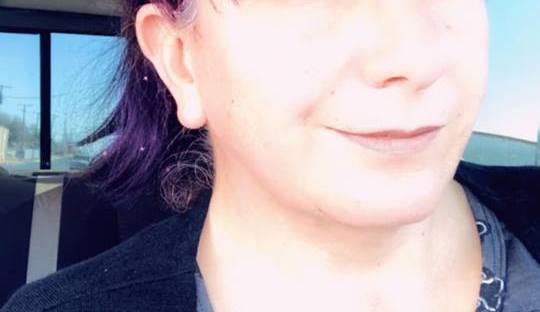 Renee is the “invisible” member of Critique Cafe. When she’s not making coffee or serving coffee, she can usually be found working on some piece of technology gone awry somewhere in town. She is usually drinking coffee while doing it.

Renee was born somewhere, and raised somewhere, and then “life stuff” happened here and there, as stuff is wont to do. Schools and colleges were attended, but the important stuff started happening when she finally found her way to Fort Stockton in 1998, where she and her husband Brian raised 6 gorgeous daughters. Renee was the Director of the public library until 2006, when she decided that having 6 teenage girls at home merited a bit more attention than she was offering. That lasted less than a year, because having 6 teenage girls at home was a nightmare and she needed a job to keep her sanity. So she became a systems engineer for an oil and gas company, and retired in 2014 to open a family business with her husband and two of their daughters. Now she, and they, pour all of their time and energy (and money!) into running a family-friendly coffee shop and music/ event venue, where Renee has added “tour manager”, “booking agent”, “sound engineer”, “special event coordinator” and “coffee mechanic” to her already too-large collection of hats. If you ask her, she will just say she “works at The Garage”.

Although a prolific writer in her 20s and 30s, she found she wrote less over the years, and worked more. Then she discovered NANOWRIMO (National Novel Writing Month) in 2007, and takes great joy in November of each year when she actually completes a writing project. She enjoys critiquing, and takes an undue amount of pleasure in wielding a red pen.

When not working, Renee enjoys reading and music. She plays saxophone, but ensures us no one wants to hear her play it. She loves all things tech, and is usually the first person to try out new gadgets. She’s involved in various community and business organizations, including the Chamber of Commerce and Rotary International.

Steam momentarily blocked David’s face as he poured the pot of pasta over the colander, but Stephanie knew he was still glaring at her. As the steam dissipated, David slammed the pot down, placing his hands on the counter on either side of it, giving Stephanie the most angry look he could muster. An act he found more difficult than he anticipated with the heat of the steaming pasta making his eyes sting. He squared his shoulders – he wouldn’t back down, not this time. After a few seconds of stare-down, Stephanie finally sighed, rolled her eyes, and turned to leave the kitchen.

“At least think about it!” David yelled at her retreating backside. She lifted a hand dismissively as the swinging kitchen doors closed behind her.

“Dammit “ David growled as he slammed his palm on the marble counter, then looked around at the people in the kitchen watching him intently. “What the hell are you looking at it? Get that sauce off the burner and start plating.“

The waitress that had been standing in the corner gave Chris, the sous chef, a knowing look and left through the swinging doors as Chris stirred the sauce one more time. Not taking his eyes off the sauce, he spoke, “Why do you keep pushing her? You have this argument with her every year.”

“That attitude is why you will always be a sous chef, Chris, and never a chef. This restaurant will never be anything more than it is now without getting some sort of recognition.”

Chris took the plate that David had arranged the ravioli on and began to drizzle the sauce carefully over them. “The restaurant, or you?”, he muttered under his breath.

David glared at Chris but didn’t mention his comment. “Just get the bread onto these plates and get them to Carla.” He looked around then bellowed “where the hell is Carla?” Chris shook his head. It was going to be a very long week at the Fairview Cafe.

Carla came back through the swinging door. “Are you done with your tantrum yet?” she said with a smirk.

David picked up the two plates of ravioli and held them out to her. “Just do your damn job and get these out to the customers before they get cold.”

Carla bowed theatrically to David. “Yes, your highness, anything you say, your highness.“ She giggled and took both plates from him then backed out the door grinning as David’s face reddened even more.

He turned back to Chris. “Last straw, Chris. That little punk has to GO.”

Chris shrugged and turned to the resting cabinet to pull out the meatloaf. “Not your call, man. Stephanie hasn’t had a single problem with her. It’s only been a month and she caught on quick. Might be the best waitress we’ve had.”

snorted. “Best?? She’s a snotty immature brat with no respect. I don’t know why Emma had to go and quit on us.”

Chris laughed as he cut thick generous slices of the meatloaf. “Damn man, she was 73, give her a break! The day Emma turned 70 she told us she was going to retire and move to Oklahoma to be near her GREAT grandkids. We all sat out there in that dining room eating strawberry pie and drinking champagne to celebrate her birthday AND her getting to move close to family. The only reason she stayed so long after that was because you kept running off all the new waitresses.“

“Yeah yeah, I remember. But I still don’t know WHY she has to retire.” He punctuated ‘retire’ with his fingers making air quotes. “She can still run circles around these kids.”

“Not everyone’s lives revolve around their work, man. Some of us have other things that are important to us, too.”

“More important than your career? And that there is yet another reason why you will always be a SOUS chef, Chris. You have no drive. No ambition.”

“You always say that like it’s an insult. Have you never once thought to yourself ‘hey, I wonder why Chris never takes any of my advice. I wonder why he doesn’t get upset when I call him ‘only’ a sous chef?’. You haven’t, have you? Has it never crossed your mind that all I ever WANTED to be was a sous chef? Hmm?”

David shook his head in bewilderment. “You’re talking nonsense. No one ever goes to culinary school with the goal of being a sous chef, it’s just a stepping stone to being CHEF.” He threw the colander into the sink with more force than he meant to, caus
ing a huge clang to reverberate across the kitchen. “Then again, not that any of that matters HERE. HERE we aren’t chefs. HERE we might as well be prepping for a hot dog eating contest, because 90% of our menu …”

“OH,” Chris cut him off and ran back to the stove, “thanks for reminding me, man! Don’t want to burn our chili!”