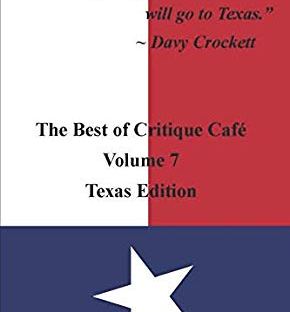 “She was kind of over the top.”

The Best of Critique Café

is available for purchase on Amazon!

Mission Statement – The mission of Critique Café Chatter is to spotlight the talents and writing efforts of the members of Critique Café Fort Stockton Area Writers Group. Contributing members of this newsletter hope to reach out to others within the community who enjoy creative writing and the literary arts. In the spirit of our sponsor H. Edward Petsch Arts and Music Memorial Fund, we are striving to stim- ulate the arts within the Fort Stockton, TX area.

12 Baby Dills or pickles of choice

Salt and pepper to taste

Preheat oven to 350°F. Halve the pickles lengthwise. Carefully scoop out the centers. Pat dry. In a medium bowl combine cream cheese, cheddar cheese, jalapenos, garlic powder, salt, and pepper. Transfer cream cheese mixture to a re-sealable plastic bag. Snip the corner of the bag and pipe cream cheese mixture into the pickle halves. Wrap each pickle half with ham and secure with a toothpick, if needed. Place pickles in a foil-lined baking pan. If desired, brush with jam. Bake about 15 minutes or until heated through.

The month May was named for Maia, the Greek goddess of fertility.

In any given year, no month ever begins or ends on the same day of the week as May does.

In Hawaii, May 1 is celebrated as Lei Day. Leis are garlands or wreaths that are often made with native Hawaiian flowers and nuts. Nowadays, they are given as a symbol of greeting, farewell, affection, celebration, or honor, in the spirit of aloha. Lei Day originated in 1927, when poet Don Blanding proposed a holiday to recognize the lei’s role in Hawaiian culture.

May’s full Moon, the Full Flower Moon, occurs on the 29th, at 10:20 A.M. (EDT). It’s the time flowers tend to spring up and blos- som. Some Native American tribes called it the “Corn Moon”, for they believed it to be the best time to plant corn.

May was once considered a bad luck month to get married. There is a poem that says “Marry in May and you’ll rue the day”.

May’s birthstone is the emerald which is emblematic of love and success.

Be sure to keep your floors dusty, your sheets dirty, and stay single this month. Superstition says that you shouldn’t buy a broom or wash a blanket in May. Why? Because, “Brooms bought in May sweep the family away.”

I’m pretty sure all these superstitions only started because it’s so much easier to rhyme words with May than any other month. It’s probably why there isn’t a saying like, “Marry me in January, and I’ll be your huckleberry.”

Ugh. That was awful. I’m sorry.

The earliest form of May Day seems to be the Festival of Flora, during the Roman Republican era. Flora was the goddess of flowers and linked to spring, fertility, and youth. The festival lasted for several days at the end of April and first part of May. Forms of celebration included drinking, the wearing of flowers, lightweight, brightly colored garments, and farces and mimes, especially those of a bawdy nature. It also has ties to Beltane, an Irish holiday that marked the beginning of summer. Rituals were preformed to protect the cattle, crops and people and to encourage growth. Special bonfires were kindled and the people and cattle would walk around and even jump over the fires or embers. They would have feasts and decorate a May Bush with flowers, ribbons and bright shells. If you washed your face in the morning dew on May 1, it was believed you would have beauty and stay youthful.

As Europe became Christianized, pagan holidays were absorbed into Christian holidays or lost religious significance. May Day became a secular holiday, with its celebrations including the gathering of wildflowers to weave into decorations that were often used to crown a May king and queen, as well as for decorating a May tree or Maypole. People then danced around the tree. These rites were probably intended to ensure fertility, and its celebrations involved joy and light-hearted fun in the outdoors as the warmer weather of spring and summer began.

In America, the Puritans of New England considered the celebrations for May Day to be licentious and pagan so the holiday never became an important part of American culture. In later times, it became a popular tradition to give May baskets – small baskets filled with flowers or sweets. These were usually given anonymously to friends and neighbors. This tradition had all but died out by the later part of the twentieth century.

On a personal note, as a child growing up in Iowa, we would prepare construction paper cones with a handle and try finding a few flowers to put in them. Since Iowa has intense winters, by May 1, about all we could find was a few dandelions and a handful of violets. We would usually fill the bottom of the cone with popcorn; add a couple candies and two or three of our pitiful flowers. We were encouraged, by our sweet mother, to hang them on the doors of elderly neighbors, knock and run like the wind. Simple pleasures, but we took so much joy in the doing.

May brings warmer temperatures and colorful flowers and it also brings Mother’s Day. It’s a special day to thank the mother in our life for all she does and tell her how much she has meant to you. My mother passed away a few years ago, so I will tell everyone how special she was.

My mother was the twelfth child of thirteen born to a German immigrant on a farm 45 miles north of Dallas, Texas. She completed an eighth-grade education, all that was available at her local school. When she married my father, she gained an eight-year old son from his previous marriage. She later had three sons of her own.

My mother entered the university under a probation program for non-high school graduates. Under that program, she was required to maintain a B-average. She got only one B and the remainder all A’s on the way to getting her BA in education, and began teaching elementary school. Later she got a MA degree and taught for 28 years.

My mother loved and accepted everyone. Going through the racial turmoil in the late 1960’s, she would just shake her head and say, “Why can’t we all just get along.” She had no biases against color or sexual orientation, she just saw all humans as beings of God.

She was my moral compass and the rock foundation in my life and somedays I really miss her. If your mother is still living, make sure to tell her how special she is to you this Mother’s Day.