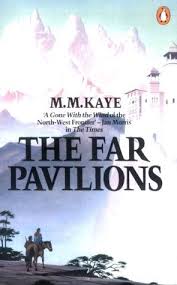 The Far Pavilions by M.M. Kaye

M. M. Kaye (Mary Margaret Kaye) won worldwide fame for her epic novel The Far Pavilions, an international best-seller in 1978. The book was made into a movie and a Broadway show.

It took her 10 years of writing and editing before she submitted the first draft of The Far Pavilions to a publisher. The story is set in India during both national and tribal conflicts of the turn of the 20th century. It opens with the birth of a British child born during his parents touring in India. After the deaths of both his parents, he is adopted by his father’s housekeeper and lives his childhood as a poor Indian subject. In his teens he is discovered by the British and sent to England for formal studies. His story is one of conflict of cultures, faiths, and loyalties for he returns to India as an adult. Here he finds romance, danger, and a struggle for his own identity.

The Far Pavilions has been recognized as one of the finest historical fiction novels of the 20th Century, alongside such epics as Gone With the Wind. It has won acclaim in English speaking countries and translated into dozens of foreign languages.

This was followed by Shadow of the Moon and Trade Wind. She also wrote and illustrated The Ordinary Princess, a children’s book and authored a dozen detective novels, including Death in Kashmir and Death in Zanzibar.